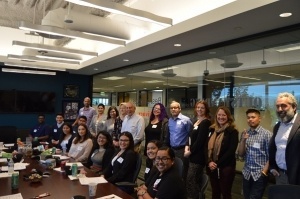 On March 28th, Scherzer International had the pleasure of hosting an amazing group of students from the C5LA Youth Foundation. The students began their visit in the company’s conference room, where managers and executives gave presentations describing their duties, their department’s role in the company, and their personal academic and career paths. The session wrapped up with a lively discussion driven by the C5LA students’ questions about background checks, running a business and innovation.

Afterwards, students and staff gathered in the break room for a social lunch to get a sense of the company’s culture and work environment.  After filling up on lunch and conversation, the students were given a tour of SI’s office to see what happens “behind the scenes” when preparing background reports.

Our C5LA guests wrapped up their visit by hearing from our HR manager who described SI’s summer internship program, which has included C5LA students in past years, some of whom have chosen to return to SI as full time employees. Everyone at SI agrees that any one of the students who visited us in March would be a great asset to the team!

Larry and Carole Scherzer both serve on the C5LA foundation’s Board of Directors and are strong supporters of the organization’s mission and programs. C5LA aims to provide underserved adolescents throughout the Los Angeles area with the resources and opportunities necessary for them to successfully pursue a college education and lead in their communities.

About the C5LA visit, Larry Scherzer said, “It was very moving to see such bright, ambitious students engaging with SI’s employees and taking such interest in our business. I keep thinking about one of C5LA’s theme songs, Ain’t No Mountain High Enough.”

Scherzer International makes a conscious effort to give back to the community as much as possible. The company regularly participates in fundraisers and toy drives benefiting organizations such as the Arthritis Foundation and Child and Family Guidance Center.

This section does not constitute legal advice. No recipients of this content, or any other content from our website, should act or refrain from acting on the basis of any information included therein without seeking appropriate legal advice from a qualified attorney licensed in the applicable jurisdiction.